Do Astrocytes Play a Role in Brain Performance?

Our brains are tremendously complex – in may respects as vast as the universe. The brain is organized into different regions that each seems to have a particular function of expertise. The brain itself is composed of various types of brain cells, fatty acids, fluids, and neurotransmitters. We have heard about neurons like the “grey matter” of the brain, which are found in the more interior regions of the brain, and perhaps about “white matter” which separates the grey matter into various regions, and so on.

But one of the least discussed type of brain cell are the astroglia. These Astrocyte cells have usually been described as simply being the “glue” that holds the brain together, and they provide nutritional support to parts of the nervous system. But new research is discovering new importance to this type of brain cell that might actually make a difference in how we understand ADHD in the human brain. 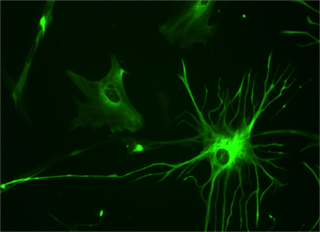 A study recently published in Science Signaling from a research team at University of Rochester Medical Center reports that these astrocytes are much more important that we had previously thought. The team reports that these cells are very important in slowing down or stopping various brain activities, or reducing their intensity. They also play a role in determining when various neurons will “fire” and when they won’t. This understanding goes far beyond previous descriptions of the astrocytes as simple “nurse maids” to neurons, working to keep them healthy and happy.

For the brain to function optimally many factors have to be operating in sync with each other. There has to be an optimal balance of sodium and potassium, and a proper balance of calcium and magnesium, for the cells to work well, and these astrocytes are active in maintaining this balance by getting rid of any excesses of these minerals. But they can also control actual neuronal activity by controlling potassium levels in the area around them as they live among the neurons in the cortex.

By the way, its good to help them out by finding good sources of these minerals in your daily diet. And in a pinch here are some tips:

Part of what has been learned in studying astrocytes is the importance of gliotransmitters such as glutamic acids (also an important neurotransmitter) and ATP in the communication between neurons and astrocytes. This new research has also found that by the astrocytes controlling potassium levels around them, the control neuronal activity levels and reduce the “noise” or “static” among the neurons so that they are more efficient.

This may give new clues into future treatments for epilepsy, tic disorders, and ADHD.